The domestic setting of a friend’s basement will be the backdrop to the Whitney Vangrin Valentine’s Day performance Sugared. Vangrin will engage in physical actions that waver upon simulated and real violence. Seeking to confront her own escalation of belligerence and aggression as it manifests in social interaction, she will also extend the themes of the performance to wider instances of violence within intimate relationships.

Refreshments in the form of homemade sweets and soured pickled Hors d'oeuvres will be offered on the evening of the performance, as well as wine donated by the Winesisterhood.

Monetary donations collected on the night will go towards Safe Horizon the largest non-profit victim services agency in the United States. Safe Horizon touches the lives of more than 250,000 children, adults, and families affected by crime and abuse throughout New York City each year. Safe Horizon partners with governmental and other community agencies and also advocates for policies on a local, state, and national level on behalf of those affected by violence and abuse. 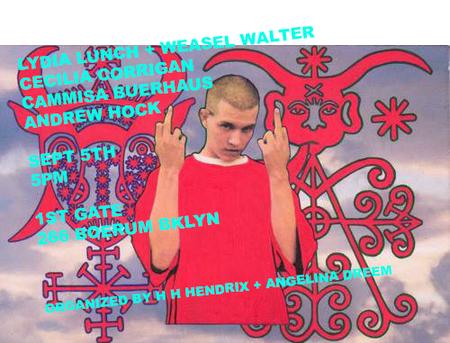 Sign up here to listen to the 26 minute audiobook 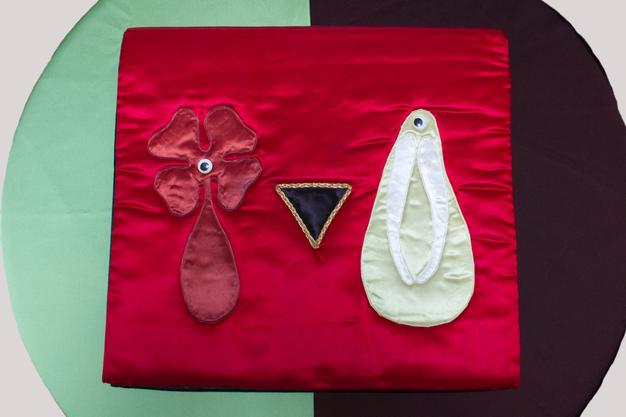 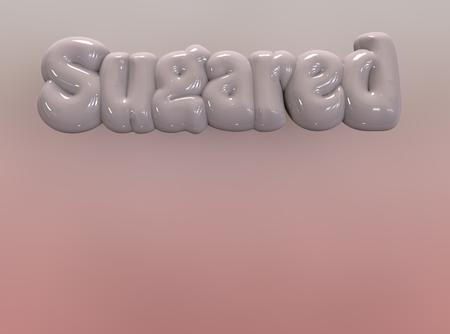 This event is not about Hunter Hunt-Hendrix, rather IT takes place in his space, between him, literally and ‘figuratively’ speaking.

I.
I met Hunter in a typically fogged out and fucked up 3am state deep in the debauched loins of a certain infamous basement club night in 2008. As he extended his hand in greeting, his muttered voice was drowned out by the distorted KR-55 drum machine incessantly blaring out of a half busted, booze encrusted speaker behind him, and I misheard him stating his name as two imperative commands demanded of me: 1. “Hunt her.” 2. “Hunt Hendrix”.
Being in a rather dejected, dazed state in that moment after yet another relationship had sadly fallen apart for me the day before, I heard the first statement as a rather sardonically passive aggressive taunt of libidinal futility, almost kicking me as I was down, as in: “Hunt her”…(yeah I tried that man, failed miserably, again…what an asshole) I heard the second as a nihilistic fuck you to musical inspiration: “Hunt Hendrix”…(right, he died like 50 years ago dude, wtf?…) I came to see these two statements he very cuntily issued to me as diagrammatically representing an impossible, split space – for a failed pursuit of a beloved body on one side (her), and a cerebral shutdown of a musical mind in the other (Hendrix), and “Hunter” was to be found somewhere in the middle of IT – a space between this body and head.

II.
This past November I recalled this impossible body born in the mutteringly misheard shady latenight basement as I was looking for a location to shoot a scene entitled “No Body Gets a Head” from my recent episodic video Your Vacuum Sucks made in collaboration with Alexandra Lerman. The narrative depicts a physical body in conflict with ITself. The head and body break up and separate in a back yard, get into a domestic dispute with each other in a basement, and it all ends with the body getting a new head, so nobody gets ahead. I saw my (literally) corporeally explosive mind/body melodrama as precisely mirroring the diagram which “Hunt Her.” / “Hunt Hendrix.” Had laid out before me back in 2008. And I knew this hugely crucial and climactic scene of our forthcoming vacuous video that was truly destined to suck (again literally) absolutely had to go down inside the impossible space Hunter embodies. He kindly allowed us to shoot in IT.

III.
About a month ago following the opening of my recent show in New York which featured the premiere of Your Vacuum Sucks, Hunter came over and I showed him “No Body Gets a Head”, which he seemed to enjoy watching unfold inside of his space between. He said he was planning to start a gallery in this same basement called First Gate where t(his) body exploded, and he invited me to present the inaugural show inside of IT. I decided to restage an early work (I thought appropriately for this Very Rare occasion) entitled A Space Between, which I originally showed at CalArts in the fall of 1991, and later at Greene Naftali Gallery in New York the fall of 1996.

From 1990-1993 I created a series of five alternative alphabets based on graphic manipulations of the 26 character Latin alphabet, which formed the foundation for a series of sculptural, pictorial, and media based gallery installations. A Space Between is an exhibition of 160 2.5” x 3.5” color photographs presented on 55 14” x 17” pages which include handwriting in pencil. I referred to the work at the time as an “audiobook” as each page is accompanied by a voice emitted by a cassette tape reading the written text, as well as a ringing sound to notify the viewer when it’s time to turn the page. The 26 minute long book tells a story using the alphabet of the space between – a 329 character alphabet created by doubling the traditional 26 character Latin character: parts of two letters are combined into a new letter which may be read either way or both ways at once, generating words which have “double meanings”, literally at the level of the graphic sign. The only requirement for forming “double words” in the space between is that the two original words must contain the same number of letters.

A Space Between is a story about a single figure which embodies a hybridized compression of a clover and a walrus, chosen arbitrarily only because both words have six letters (And I liked the image of a tiny, hairy four leaf clover with huge dirty tusks). The sparklingly opulent golden clover/walrus splits apart into a clover and a walrus, they have sex, and then they re-form back into their originary compressed hybrid singularity, as the book ends on the same page it began on.

By imposing this single restraining rule upon myself in order to generate new words I hoped to open up an (impossible) visual and linguistic space in between the pre-existing characters of the Latin alphabet, which would allow for the creation of a new world of impossible objects. After an imagined entity was born as a graphic word, I then created small golden sculptures that represented material compressions of the two familiar objects into a new third visual form, which I photographed. These tiny “in-between objects” could only be discussed and described using a machine - I recorded my voice reading each of the names of the two objects which composed their make up into a four track tape recorder and played the sounds back simultaneously. This auditory compression of two familiar words by two separate vocal takes resulted in a new (third) sound which would represent their existence, or ‘name’ in the space between.

For the installation at 1st Gate the audiobook A Space Between will be available for viewing and listening through a stereo system by groups of five people at a time in the basement, accompanied by a series of paintings and ritualistic sculptures. The video “No Body Gets a Head” will be playing on a loop in the back yard. The gallery can be accessed through an alley side entrance to the backyard leading into the basement exhibition space.

Hunter Hunt-Hendrix will be serving free beverages and barbeque in the space between the alley and the basement all day long from 12pm-8pm. IT will be impossibly enjoyable.

From 2003 to 2013, Schoolwerth ran Wierd Records and the Wierd Party at Home Sweet Home on the LES of NYC. Wierd released music by 42 bands working in the genres of minimal electronics, coldwave and noise, and produced over 500 live music, dj, and performance art events internationally (www.wierdrecords.com).